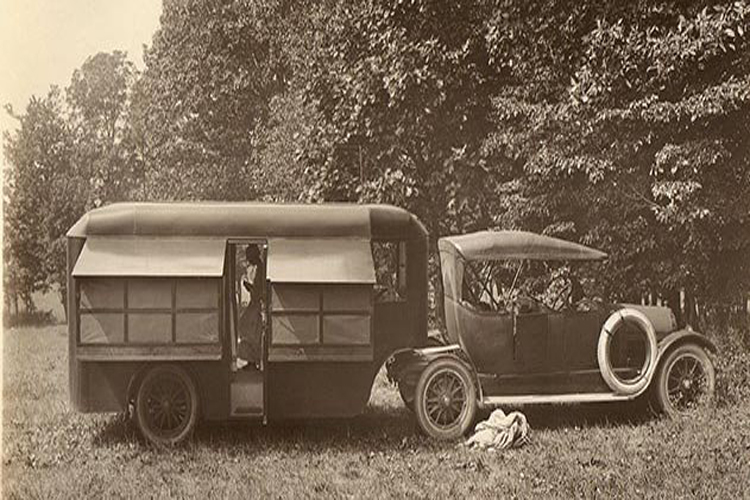 Americans have always shared a love for two things – camping and automobiles. To accommodate these two loves, the RV was born. The first RV, Pierce-Arrow’s Touring Landau, debuted in 1910 at Madison Square Garden in New York City. The Landeau featured a fold-down back seat that turned into a bed, a chamber pot toilet, and a fold-down sink. The idea took off, and soon several manufacturers began producing RVs (then called auto campers). Many of the first RVs were built by hand, and were either attached to cars or hitched up to a tow vehicle.

Automobiles at that time were quickly becoming more dependable, which led people to travel and camp more. National parks also contributed to this popularity. This spike in campers meant that the demand for campsites went up.

The first camping club, The Tin Can Tourists, was founded in 1919 in Florida. They called themselves such since they heated tin cans of food with gas stoves on the side of the road. Devoted to the interest and hobby of camping and RVing, membership soared to 150,000 campers by the mid-1930’s. The club still exists today, with members being dedicated to the appreciation of vintage RVs.

Some of the early RV pioneers included Airstream, Ford, and Winnebago. Airstream was one of the more iconic and recognizable companies. Their designs included an aluminum shell built to ensure aerodynamic performance on the road. The company survived some difficult times, including the aluminum shortage during World War Two. The company is still producing RVs today. Winnebago was one of the first companies to include plumbing and refrigeration in their RVs. This soon evolved into the much more advanced RVs we have today, which can include any feature imaginable to create a portable home.

Today, long distance travel is one the most popular uses for RVs. With many websites dedicated to campsites, it is easier than ever for people to travel around the United States in their RVs. Some RVs are even designed to go off-roading for true backcountry camping. The RV will continue to be a popular hobby and activity for Americans to partake in, as their history has been a defining aspect of America’s culture of the outdoors.